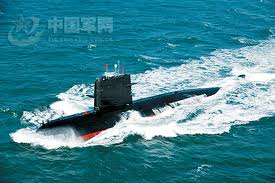 The first nuclear submarine the USS Nautilus was launched by the United States in 1954, it could remain underwater for up to four months without resurfacing.

Since then of course other countries felt the need to match the USA fleet as a mean of protecting themselves from future potential attacks.

As of today six countries deploy some form of nuclear-powered strategic submarines: the United States, Russia, France, the United Kingdom, People’s Republic of China, and India. Several other countries, including Argentina and Brazil, have ongoing projects in different phases to build nuclear-powered submarines. (Wikipedia source http://en.wikipedia.org/wiki/Nuclear_submarine )

Leaving alone for a moment the absurdity of defined third world countries like India and China where famine, misery and slavery conditions are the daily realities of the lower ladders of society that die in the millions every year, feeding the whim to join in the nuclear submarine race and other countries who have not yet solved their daily problems in terms of assuring a dignified violence free life to all of their citizens, like Brazil, rushing to join in, let’s look at what the real purpose of a nuclear submarine could be.

The submarine concept is very similar to how humanity is living at the moment, submerged,  in total denial of their illusory reality, never being able to stand by their words and finding all sorts of justification why it is OK to do so, in the micro level we call them white lies or personalities, in the macro level we call them diplomacy and strategy, both in the micro and macro the purpose of such behaviours is to hide while we plot and scheme on possible ways to have an advantage when launching the attack on one another, so we may ‘WIN”, micro Egos as personalities or Macro Egos as countries.

In an informal or social sense, diplomacy is the employment of tact to gain strategic advantage or to find mutually acceptable solutions to a common challenge, one set of tools being the phrasing of statements in a non-confrontational, or polite manner. (Wikipedia definition http://en.wikipedia.org/wiki/Diplomacy ).

Diplomacy is another thing that will disappear under a New Monetary System, because we will give up the need to gain strategic advantages on others once we will all come to the realization of Oneness and Equality and we won’t need tact to pretend the delivery of good news the promise of long lasting alliances while we plan otherwise, we will be self honest, self responsible people and so the value  of having in between recognised liars called Diplomats who are granted special immunity for their uncanny ability to deliver the best lies with the highest rate of credibility will no longer be there.

In the same way nuclear submarines represent the desire to hide someone’s true intention, if we didn’t want to deceive, in our delusional state of need for such action we would openly send warships to make our intentions clear to and declared to one another, but we don’t, because we tell ‘the others’ that they are our friends, our allies, so we cannot openly spy and threaten them, we have to sub-merge, and peep out of a key hole to check what are  they really up to. This is how we justify what we do, we tell ourselves that we don’t trust and spy on others because we don’t believe their honest highlighted intentions, but in reality it is because we are aware of our own dis- honest intention that we cannot trust another to stand by what they say, what they have agreed upon, since we don’t stand by our words -and we know it-, why should they ?

In an Equal Money System, the whole system will be rewritten to support Life and to have Life as the Only value that All of Us will agree to respect and support unconditionally.

In such a new mind frame it is obvious that all armaments and weaponry will be dismantled, as they are not supporting Life, we will instead find a good use to all that metal which will give the planet a break from the raping of the resources we commit everyday in the name of protecting ourselves from our imaginary fears, we won’t need weapons to harm each other, because the harming and abuse of each other will stop with an Equal Money System, and where it should not stop naturally measures will be taken to ensure that all finally get the point, there is no freedom without Equality and Oneness, all freedom outside of Equality is imaginary and so it’s about time we let go of our imagined freedoms and fears to embrace a principle that will stand for what is best for All.

Since there will be no secrets within an EMS because secrets are a source of abuse, there will be no need to hide in the sea for 4 months without resurfacing to check each other secrets out, and there will be no desire to attack others or fears that we have to protect and to therefore build up weapons for the days our imaginary threats will finally sur-face and strike us. Furthermore, the thermal damage caused by the nuclear reactors might not be worth their use, they leave a wake of heated water that might harm extensively the underwater Life, so as we said, since the driving principle will be what is Best for All we will have to assess at a later stage their use and sustainability, if submarines shall still exists, they might be used for scientific purposes to assess the damages we have done to the sea and work out solutions. Their routes would be public knowledge and their missions too. One sure thing is there will no longer be nuclear armed submarines, how we will power them we will work it out together within the principle of what is Best for All.

Once everyone will be guaranteed a dignified Life we will have the time to rediscover Our Real Human Nature and see, would we participate in war games if we were free from fears, secrets, desires and if we all had access to the resources of the Earth Equally, just because we are born on this planet and so the planet is yours, mine, ours as much as everyone’s else, (and this includes All Life Expressions ) ? We are the product of our environment and of our acceptances and allowances of this state of things being unchangeable, we didn’t come out too well from this environment, we need to change the environment and ourselves to support Life before we can come to the ultimate conclusion about our nature.

Can we stop our internal wars, judgements, polarities of good and bad, so we may see what is Here and that Here no one is more than another or has more rights than another? Can we embrace the principle of Oneness and Equality and stand for what is Best for All ?

Join us while we rewrite the Future you too will be a part of, because within an Equal Money System, No one is Excluded, this is what Oneness stands for and therefore it stands for you too, join us so you will be + 1 standing for Change, Equal and One.