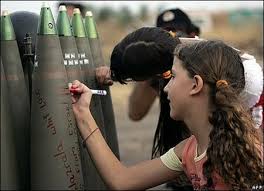 Many people are not aware that our History has been rewritten to portray some powerful groups as entitled to what they claimed for themselves by taking it from the world resources, from the world wealth that belonged to all.

There are many conspiracy in this world, but none as powerful as the Money and Power conspiracy and such lobby is led by highly unscrupulous and educated men who have understood that our history creates our future and that a lie told often enough will, in due time, become not only the Truth but an acceptable Truth at that.

I know that this blog will be very controversial by its very nature, but it seems appropriate to write it nonetheless in such times, because many of the upcoming, in-the-making events, are rooted in this very first huge lie that has been told, repeated, written, until it became accepted and until we came to believe that actions of a repugnant nature such as the history of Palestine and Israel had a reason to be, we came to believe that the Jews and in the specific the Zionist Jews which are fought at present by the Jews that do not agree with the World dominance plan exerted in the past 50 years over less powerful groups, had a right to a land that was inhabited by other peaceful people, because it was ‘their promised land’, it was promised to them by God himself and who would go against such promise? Apparently so far, no one.

Imagine this, you are quarreling with your neighbor, he actually has some good reasons to want to have you isolated, at every chance you have you try to put your hands on the resources that belong to him as well and have him PAY through his nose for it, you have a way to Capitalize everything and turn life into money and the lives of those around you into money-making machines, you believe you are superior and ‘a chosen one’, you believe Inequality is your birthright because you can put the ones less Equals into submission at your service to guarantee your life is great no matter what your beliefs are causing to others as a consequence, eventually in his attempt to put you somewhere where the damage you inflict on others is limited, he confines you in a ‘camp’ but he loses the plot and in fear of what you may do through your Money stand, he leaves you in confinement and extends this confinement to everyone who belongs to your same family,  your same group, just to be extra safe.

During the confinement a world war breaks out and the resources to keep you fed, albeit in isolation, come to a shortage, you are left to die like all the rest of the world, no more no less, meanwhile your friends (allies) manage to break your confinement and free you, what they find is the desolation of poorly fed people and the ravages of typhus, emaciated bodies are left all over on display, but now you see a chance to get even, no better, to get the upper hand and return to your original position of power, so you fabricate a humongous lie about your neighbor killing 6 millions of your people, burning them in ovens while they were alive, you bring into the picture women and children, you paint such a horrifying scenario that your allies demand compensation for the actions of your neighbor, not only you demand that Your-Story is burnt into the Minds of Mankind, that it becomes a compulsory teaching and that it can never be investigated or discredited – failing to do so will send people to jail for life.

Now you have a special place carved for yourself into the world and into the Human Mind, you are the Victim of a Holocaust, you define it appropriately HOLO as in holographic, as in imaginary, because you only needed the image and likeness of a real tragedy to imprint into Humanity for your ever-to-be-milked benefits and then you ask for a LAND that you can call your own, many are not aware that you would have settled for Madagascar because all the behind the curtains plotting is deleted from Human History, what remains is the last version of the lie, the God Promised Land, you didn’t care that you would STEAL this land from others and evict them, because you had the international support of other thieves, you didn’t even care that your presence may wreak havoc in the region called Middle East or that a proud country like Germany would be forced to pay you back in restitution to this day, casting a debt on the shoulder of those that were not yet born for a sin that no one ever committed but that you saw fit to paint in clear colors and fund with all the money you could steal through the banking system that you returned under your control, deleting all the preventative measures of those that wanted you out of the game, because the greed you live on is just without borders and limits of any kind.

This is the story of the Jews and Israel, there have been many such atrocities in history but none of this calibre, none that sought to have the support of all of humanity, none that fashioned a LIE into a History so solid that unless we unveil it, it will end up forgotten and all that will stand will be the LIE as His-Story and no one will be the wiser for it.

A few people have gone to jail for challenging this LIE, David Irving is one of them, I have read with interest the whole entry about him in Wikipedia, amazingly some of the persecution he was subjected to is well reported although in the light of proving beyond any reasonable doubt that the Holocaust DID happen and that he was to be held accountable for being a Holocaust Denier.

Isn’t this interesting? No one goes to jail for denying World War II, worse case they will be considered a fruitcake, but when it comes to the Holocaust there are international Laws in place that forbid its denial in the face of common sense proofs that have been collected in several works of scholars from all sides of the debate and that can be found HERE for free download.

Now, the topic of tampering with history would not be very relevant if one of those that have been trying to expose the Truth was no other than the Iranian president Ahmadinejad, and not just once but on several occasions, here is an interview excerpt with Larry King where the Truth spoken with absolute calm shows what the United States really care about, with Israel they are the Fox and the Cat of Pinocchio Story , Liars, always trying to manipulate public opinions with words such as ‘human rights’ and ‘freedom’ and ‘humanitarian’ none of which they live, being the major players in a world of abuse that will see no end, unless we stand up and say that this world is NOT working bar for the USA and Israel Kingpins maybe, while all the rest are kept down in the world by words that misrepresent ongoing abuse perpetrated through an impersonal economic system where some win so all the rest may lose.

Now, here we are deciding if it’s the case to attack Syria (a friend of Iran) to protect Syrian people, we can’t even see how ridiculous this proposal is, this should be a point of concern for us all and the state of our mental health, when-ever has the people been helped by remote bombing? Or is it safe to say ‘never ‘ because we used to have ‘boots on land’ but this time we are planning a surgical war, attempting to remove the cancer we perceive in this world elsewhere vs in our own homes, in our own Minds, where we have allowed any hen that lays golden eggs to lay down their truth for us to suck it up, truths that are damaging the world, humanity, our integrity as human beings -and all in the name of Money.

So, to end this story, it doesn’t really matter if you are a believer in the Holocaust or a supporter of Revision and Holocaust Denial, we should just be aware that we are making life endangering choices on claims that have become our truths, on hatred that has been manufactured for the perusal of some and while we don’t want to slap Iran directly in fear that some may dig out what has been going on when the Iranian president called a spade a spade, we may hold on to a legitimate doubt that we have been fucked with badly for decades and that we are no longer in a position to make informed decisions of any kind and in that stand refuse to hold arms against any other living being, be that for the delusion of humanitarian scopes or for a religious I-deal or some other Crap that we use to keep the war machine going, in this case going as far as manufacturing proof of wrongdoing of the Syrian people so that no one will oppose the entry of the ‘Saviours’ into an unnecessary and potentially world-wide harmful conflict.

We are about to harm the friend of our Public Enemy, just because we can, just because our interested are not as vested into Syria as much as they are in Iran and because Iran has a nuclear capability and the balls to retaliate, not because they are after a war but because they have had enough and then some of the Americans, their Zionist friends and bankers that pull the strings and they believe they’ll die and go to heaven for a just cause, so really how STUPID would it be to attack Syria, Iran and the Middle East will stand up this time and there will be no end to the sorrows to come and all in the name of some desire to keep the lies going and make a few more pennies on the expendable lives of those that will go and die so some can amass even more riches.

Everyone is innocent until found guilty and tried, a few gossips on a gas attack, by a substance supplied by the same ones that are now rising to claim foul play, sounds like the ‘trust Me’ of the time of Afghanistan, that proved to be a big fat lie as a cover–up for oil interests in the region, why not say NO to war, save a hell of a lot of money and start policies for the benefit of all such as a Living Income Guaranteed to make sure everyone has enough to live, then when the Puppet Masters will come again with their War Proposal, trying to design War friendly activities and tools, such as missiles signing (?), to send our well wishing to countries we know nothing and understand nothing about, they may be met with contempt and laughter and impeached for treason for crimes against humanity. And that would be about time too.

Choose Life for ALL, Trust that you have No Clue about what has been going on and is going on, no one is wise enough at the moment to do otherwise.

One comment on “Day 353: The Holohoax, Iran and an Inconvenient friend”