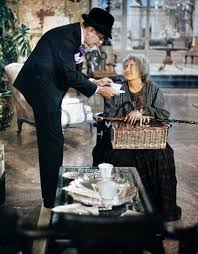 Every year we say ‘they don’t make movies like those anymore’, yeap, they don’t, maybe there is hope for humanity after all if we can’t bear to tell such ‘so out there’ tales, in which we represent everything that is not working within our society, bless it and make it palatable, to teach children that ‘this is the way things have always been’- and look everyone is just happy where they are, Isn’t Life Wonderful?

Take this ‘Pocketful of Miracles’, ashamed to say one of my favourite movies for years, where a woman beggar holds a gangster in her grip by selling him ‘magic lucky apples’, that she tells him are inhabited by elves who have his fate a heart -not hers obviously as she lives as a derelict surrounded by her ‘happy’ beggar friends, that support her ‘out of wedlock’ daughter that she sent to Spain to be raised in a private luxurious college, to ensure she would have a better life than the one she lived-.

The woman beggar then receives the unexpected news of the upcoming visit of her daughter and, since she had always lied to her pretending to be a very rich aristocratic lady, she is helped out by the gangster to play the part and is groomed from head to toe, because in this world we are taught to do judge the book by its cover, so she is re-clothed, made up, gets her mani & pedi and jewellery on loan and is housed at one of the most expensive hotels in New York, waiting for her daughter’s visit.

When I re-watched this movie I wondered how it could have ever moved me to tears, what was moving in such a movie? The generosity of the gangster who wanted to make sure he would have forever access to the luck provided by the loving elves living in the apples, or the attachment of the beggar woman to her far away daughter for which she collected a kickback from other derelicts such as she was, or the effort she went through to hide her shameful life to her daughter, even though when she was dressed like a queen she made it clear she couldn’t wait to return to the comfort of the streets (?), or the gangster fiance’, who had to strip half-naked to pay her fathers debts after he passed away, or the loving gesture of the police chief who accepted to play the part of the woman beggar friend to con the Spanish aristocrats that came in tow with her daughter to collect news about her, to make sure she was worthy to get married into wealth.

One wouldn’t know, it would be hard to pick today for me what was that made that movie a favourite if not the ‘feel good’ factor of the make over, because in itself the story is squalid and sad and there is nothing Christmassy about it as in ‘good’, no, it is in fact the perfect picture of our world, a world of suffering, injustice, deception and criminals, all made to look good so that the world we live in is not questioned, so that we may believe that a beggar can raise enough kickbacks to maintain a daughter for life in an expensive European educational facility, insisting that All choices are available to all if one has enough beggar friends and that misery is not so bad after all, look, some loooved it to death and would have never traded it for a 5 star life of good food, warm housing and nice clothing.

I was really asleep for a long time, if we were awake we would have told the Frank Capras of the world to piss off instead of glorifying their feel good movies in the face of this world, but we didn’t.

They no longer make movies like that, what a loss, now we have movies that are dangerously closer to our reality, where there is violence, fear, abuse, misery, maybe we had enough feel good movies to last a lifetime and we are becoming ready to face reality, which is that This World Ain’t Working and that We Have to Redesign One That Does Work for All.

Guaranteeing a Life of Dignity to All would be a good start, check out the Living Income Guaranteed, THAT would be something to celebrate, a plan to give a Life to All, and then when someone will show us a movie like Frank Capra’s we’ll say ‘imagine that, so lucky to no longer live in those times’, because there is no excuse for a world of abuse not even when we make it endearing and funny to pretend that ‘all is well after all’.

Don’t get duped. Get a Life for yourself and for All.