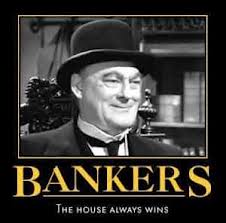 A building society boss provoked fury yesterday by saying the issue of fatcat pay was too ‘hard’ for the man in the street to understand. Nationwide chairman Geoffrey Howe compared bankers to pop stars and footballers and said they were worth their massive bonuses. Mr Howe, who is paid £300,000 a year for working less than three days a week, said it was a ‘society problem’ that people find it ‘hard to understand’ why finance chiefs earn so much more than them.

We are facing a Grave problem in our Society,

It was clearly explained by Nationwide chairman Geoffrey Howe how the common man is just too dumb to understand why bankers are worth 30% raises while others have to face Austerity.

At the AGM, retired teacher Ken Cridland said Nationwide was failing to live up to its ‘We’re a bank which isn’t a bank’ slogan, saying the company was no better than the big banks.

‘If I understand rightly, all of our executive directors are millionaires and the non-executive often have other part time jobs,’ he said. Alan Debenham, honorary secretary of the Building Societies Members Association, described Nationwide directors’ pay as ‘daylight robbery’ and ‘morally obscene’.

‘Yet again, and this year in times of great national austerity, our directors have awarded themselves, as greedily as ever, extremely excessive bonuses, more than doubling their excessive annual salaries, which already had an outlandish 30 per cent uplift last year.’

PhD student Asa Cusack, 33, said: ‘You could be offering lower pay packets but you’re choosing not to and, frankly, I find your justification immoral and very immodest.’

He added: ‘You’re not magicians… you’re not irreplaceable and you’re taking money from the rest of us, essentially, for yourselves.’

I recently told that to my Bank staff ‘ you are not Magicians’,  I wrote them ‘if you can take this relationship to court, prove that you stood in and for my interest at all times, made every effort to inform me every step of the way of what you were doing -without my consent, then you are not Bankers, you are Magicians’. Never heard from them again.

I like the context I used better, for the simple reason that I don’t want to be having the same discussion about unequal, immoral pay gap with the Magicians Unions a few years down the line – it’s just pretty simple, each Life has a Time Value, if Time=Life no one would have any objection in seeing the common sense of Equal Pay – let’s be reasonable as in system reasonable for the time being, no one had the same chance at an education, some are in fact dumb, mostly by design, for the time being we can accept that re-equalizing the play field will have to start with a Living Income Guaranteed, just because Life should not have a price tag and that some giving  themselves a 30% raise while cutting from the wages at the bottom, it’s just plain wrong.

Apparently, Mr. Howe said,  we are just too stupid to comprehend the pivotal role those figures play in our society, pop stars, football players and bankers, we surely need them, we can’t conceive a world that would run smoothly without their precious contribution, what if Lady Gaga no longer existed, or if AC Milan players would stop their entertaining matches, and ultimately, what if Bankers would stop thieving people by moving digital imaginary currencies as guarantees for Real Assets like Homes or worse, like People’s Lives?

That would be inconceivable, while we think we are clever by believing that in a world of finite resources, of which Money has become the embodiment of them all, what is pulled out on one side of the Equation will not cause consequences in the lives of those that find themselves on the other side and have to go without.

This world exists by our design, we accept and allow some to have more than others because we believe they are worth more than others even when their contribution to the world and to the good of All is nowhere to be seen.

Look at Royalty, we are paying royalties to have the Royals exist, we are the  royalties fan club, we want Kings and Queens because we believe their existence gives Us Value in our own country, there is a whole industry moving around the idea of Royalty, Royal Watchers, Royal Advisors, Royal Suppliers, redefining our society will have to include this group that will lose their jobs, their sense of self, their worth, because when you are no longer royally involved, who the fuck are you?

and yet, what gives us our Worth on this planet are things that we cannot control, such as a Birth Place, a Nationality, a Geographical Location, the kind of wealth we are born into which will determine what kind of choices we will be able to make., what kind of education will we be able to access, what kind of traumas will we have to face before we even enter the education system as impaired goodfornothing meatbags just to come out unable to see through this Unequal Worth  game and stop it, it would just take the majority who is struggling to speak up and no longer accept Inequality as a livable, sustainable  system,  it’s that simple.

Millions of lives go wasted each year so that some pompous asses can have it their way, the whole way and the responsibility is not in the hands of those perched on top of the food chain but in the hands of all those at the bottom that spend their lives staring upward in adoration, while they get screwed out of what should be everyone’s birthright, The Right to a Dignified Life for All.

We are only as Dumb as we allow ourselves to be, have a Dumbness test, are you in adoration for the Royal Baby? Gooing at his pictures – while thousands of kids die every day of starvation? Yeah? Your are truly pretty dumb then. Stop it.

A Living Income Guaranteed, will put an end to abuses, some are doing what they do because we accept it and allow it, You can say STOP and Stand for a World that works for All.