First, the people who have in the past studied such subjects and subsequently spread their findings and subjective interpretations, have done so to a very selected number of people, the ones who had the money to attend such extravagant, useless conferences.

I don’t intend to put knowledge down per se, what I am stating is that knowledge that it’s by its very nature Elitist, will no longer exists under an Equal Money System.

I define the Knowledge and study of the Mayan calendar as Elitist for a simple reason, only people with enough money to pay for such knowledge and enough time (=Money) to wonder about such things have delved into Mayan or esoteric studies, whose practicality was close to none if not working out a belief system of Hope in a brighter future that would prevent us from facing reality and what is Here and make the necessary changes.

When you are starving you won’t give a shit about the Mayan Calendar, will you ? And if you make 3 dollars a day working like a slave in a third world country to uphold the CONSUMPTION of our Consumerism society you would have to save for 30 years to have enough to attend one of such fancy conferences and would you care anyway ?

If we call ourselves Humane and we know that the world is in the condition it is now, honestly, who gives a shit about the Mayan calendar and what it might have said about 2012, we could have just waited and see and then worked the knowledge backward if we still found the need to do so, while we busied and willed ourselves to take practical action to stop this system of inequalities where for some the daily problems are about getting the food and water to survive and not sitting cross-legged in a heavenly room with heavenly people watching heavenly drawings of an imaginary past and future, just to dream that on 2012 something will magically just shift into place, a place that we have been unwilling to build while we wandered off in our Minds into Mayan conjunctures about ‘what did they really mean’ ?

Because seriously, unless this knowledge is useful for the problems at hands why are we wasting our time while half of the world struggles and suffers ?

Knowledge that is designed to have people wander off in their heads about a better future and a time of Enlightenment, will no longer be desired, because once you have Heaven on Earth, will we really care why the Mayan kept their calendar to track time or we would all be just too busy living Here, enjoying one another and experiencing Life One and Equal for All ?

So, knowledge and how we perceive knowledge will change within a new monetary system, esoteric knowledge and secret knowledge will no longer exist, because have a look, esoteric knowledge too was designed to give some an upper hand regarding how to manipulate an illusory system of energy for self-interest and to avoid the consequences of one’s words and actions and divert them onto someone else, who says that the ones suffering now deserve it, that they are playing out their own karma, what if they were playing out our own karma, what if we did within secret knowledge found ways to divert the con-sequences of our existence onto someone else, a clear example the Law of Attraction, what if the half of the world that struggles and suffers is doing so, so we may continue living our privileged lives without a care in the world ?

Therefore, any secret knowledge that won’t be for the purpose of benefiting All Equally will just disappear, and the secret knowledge we should have know about, like who we are and where we came from and why will simply be revealed to All, we won’t have secrets anymore, of any kind, knowledge will be a tool for All to become equally educated which doesn’t mean that one will not have choices in the matter of their education, but the choices will be among subjects that stand  for individuality in Oneness and Equality within the principle of what is best for All.

For what we know the Mayan might have run out of rock, they might have run out of ideas, out of vision, out of time, they might have miscalculated how big the rock should have been for how far they wanted to record time, they might have decided that a calendar they could have used for 2000 years was good enough, they would make the new one in 2012 for another 2000 years, considering now we make a yearly one, they were ahead of us in fore-thinking  about not wasting and building things that would last, so isn’t everything we spread about the Mayan just a speculation, a way to keep ourselves busy, hoping that something will change, that we shall be saved by an external event, that we just have to sit and wait, keep doing whatever it is we justify as acceptable because there is this holy deadline to look forward to, that’s it, 2012 will do it for us, whatever it is that in self honesty we can see we should be doing can be postponed until then. 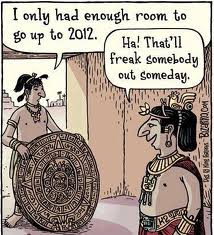 When 2012 will come and go, and we will find we are still stuck Here, freaking Mayans what did they mean only-god-knows, at that point, will we be willing to stand up for Life and make the necessary changes to realign to what is best for All, or will we dig up some more bullshit from 2000 years ago to justify why we are waiting for someone to come and save us ?

Stand up for Life now, spare yourself the disappointment of the Winter Solstice of 2012, Breathe, Earth yourself to Stop desiring to be saved and save yourself and the world with you, One and Equal.

For a Life of Equals and No More Secrets or Secret Knowledge join us, Change Yourself to Change the World with